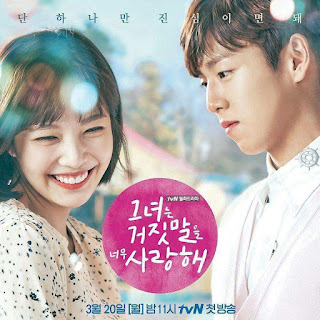 If Strong Woman Do Bong Soon is the cutest drama of 2017, then surely The Liar and His Lover has got to be the sweetest! You can tell just by looking at the poster - the pastel colour theme plus soft glow filters are splashed all over the entire 16 episodes. The premise of the series, as reflected in the title, is that songwriter-producer Kang Han Gyul (Lee Hyun Woo) has been living in a web a lies created by himself and others. The story is built around his transformation after he meets and eventually falls in love with a girl with a beautiful voice, Yoon So Rim (Park Soo Young, better known as Joy of Red Velvet). [You can watch the series here and/or read the recaps here.]

The thing about So Rim is that she not only has a lovely voice that captures the hearts of many people, she also has a bubbly and loving personality that leaves a string of boys falling head over heels in love with her. Unfortunately for these other guys, she bumps into the moody Han Gyul one day and it's love at first sight for her. She wins him over initially with her voice but subsequently also with her pure and selfless love for him. 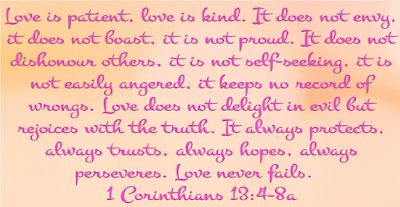 Love is patient, love is kind...it always perseveres
But it's not an easy journey and takes So Rim all of  9 episodes before Han Gyul finally realises that he has fallen not just for her voice but also for her as a person. However, she never gave up and kept on showering him with her love and attention, even in the face of his rejection. She continued to speak to him kindly despite his hurtful words, like when he got mad at her for letting her bandmates listen to and record his song without his permission.

Love is not easily angered, it keeps no record of wrongs
Actually, Han Gyul is the mystery music producer, K, who is behind So Rim's favourite band, Crude Play. His identity is hidden from the public for various reasons and he also hides it from her. That is why he became angry with her for letting her bandmates listen to a yet-to-be released song as that might have given his identity away as well as leaked the unreleased song to the public.

Later on, So Rim is spotted and signed by Han Gyul's record company. By the time she gets to tell him about it, he has already turned down the offer to produce her band (without realising that it's her) and the job has been given to Seo Chan Young (Lee Seo Won). So when So Rim breaks the happy news to him that she's been offered a contract, instead of congratulating her wholeheartedly, he loses his temper yet again at having missed the opportunity to have her sing his songs. Of course, So Rim is clueless as to the cause behind his outburst and feels hurt. But instead of blaming him for not sharing in her joy, she chides herself for not having told him earlier and forgives him readily the moment he comes back to apologise to her.

However, the bigger bombshell comes when she finds out that he is K. She is devastated that he did not trust her enough to let her in on his true identity. In fact, other than lying about his identity, he also didn't tell her about his recent breakup with his ex-girlfriend, singer Yoo Na (Hong Seo Young). So Rim accidentally discovers that the song she had recorded for him earlier had been written for Yoo Na. So now she is doubly hurt. However, she ultimately forgives Han Gyul's lies and later on even defends him while chatting with his father (Choi Min Soo) by saying that Han Gyul would never lie to intentionally hurt anyone. This reminds me of a scene much earlier on when she had already suspected that he was hiding things from her and told him so. At the time, Han Gyul had remarked that she was not acting like a normal person as anyone else would be angry at being lied to.

Another big lie that Han Gyul has a part in fabricating is that the Crude Play members, other than Chan Young, do not play the instrumental parts themselves. The music is recorded by session musicians and they simply play along to the recordings with their instruments muted during live performances. When So Rim learns about this, the Crude Play members have also had enough of living with the guilt and are considering confessing to the public. Han Gyul struggles with the decision as he fears the backlash from fans may lead to the end of the band altogether. But So Rim encourages him to reveal the truth about the band together with the rest and applauds him when he does.

Love does not envy, it does not boast, it is not proud
We witness how So Rim's love for Han Gyul remains constant, from the beginning when they were both nobodies, to when she became famous while he was still unknown, and eventually when his celebrity status is revealed. This is totally unlike her schoolmate Se Jung, who dates So Rim's bandmate Gyu Sun after they’ve become famous just so she could brag about it.

Love does not dishonour others, it is not self-seeking
So Rim's love is so wide that she even denies her own feelings and refuses to sing Han Gyul's song in order to honour her promise to Chan Young to sing only his songs. Instead, she tells Han Gyul to give his song to Yoo Na so it would not be wasted. She only sought to do good to others rather than her own gain. In contrast, Yoo Na had dumped Han Gyul because he couldn't meet her emotional needs (ie demands), and later dates their manager Jin Hyuk (Lee Jung Jin) in order to get ahead in her career.

Love always protects
So Rim also sides with Han Gyul and protects him whenever anyone tries to attack him even though he himself may feel that he was wrong (rather than wronged) and doesn’t deserve her protection. Her unconditional love for him changes him so that he also learns to protect his friends too. One of the main reasons for Crude Play miming their performances was so he could protect his music. After his turnaround, instead of trying to protect his music, Han Gyul makes a deal with CEO Yoo Hyun jung (Park Ji Young) to sell the rights of his future songs to the company in order to protect the band from getting sued.

Love always trusts, always hopes
So after the whole fiasco of having his lies exposed and then receiving So Rim's forgiveness, Han Gyul initially feels depressed as he keeps seeing his own flaws whenever he is with her. But instead of condemning him, she continues to love him and hopes that he will change for the better. He finally realises that he needs her to be beside him in order for him to become a better person.

This actually reflects God's love for us in that the Holy Spirit convicts us of our sin, yet in Jesus there is no condemnation and we receive grace and forgiveness, and God's love then leads to our transformation into Christ-likeness!

Love never fails
Yoo Na can't understand how So Rim manages to influence Han Gyul to change for the better when she could not, and lamented her 'failed love'. But So Rim doesn’t comprehend what 'failed love' is as her kind of perfect love never fails!

Perfect love drives out fear
In fact, it is So Rim’s perfect love and constant support that gives Han Gyul the courage to decide to stand up for the truth despite the negative press and public criticism. When the onslaught does come, So Rim continues to stand by him and gives him strength to start over.

Love in reality
A note of caution here though… I have not mentioned so far that So Rim’s character is a high school student while Han Gyul is a young adult in his mid-20s. So Rim fell in love with him at first sight without knowing anything about him, not even his name. And when she happened to see him again, she declared her love for him at once and exchanged phone numbers with him while still not knowing anything about him (but at least she got his name this time)! She goes against her bandmates’ warnings about meeting up with a stranger and arranges to see him again and again. Of course in K drama land everything turns out well - Han Gyul isn’t a bad guy after all and he falls in love with her too. But in real life, one must not be as naive as So Rim and make friends with a total stranger so easily for there are countless bad guys out there who are looking for young, gullible girls to prey on!

Furthermore, in the idealised K drama world, both So Rim’s character and her love are perfect. However, in reality nobody's love can be perfect like hers as none of us are perfect. Don't expect to change our partners overnight like she did either! If we are endlessly looking for such perfect love from someone else, we would be forever disappointed, or worse still, constantly hurt. The only perfect love that has the power to transform us is from God alone. We must acknowledge that our need for true love can only be met by the one true God.