Love in the Moonlight (or Moonlight Drawn by Clouds) [Spoiler Alert!!!] - part 1 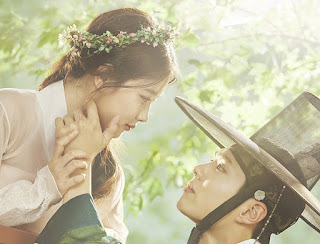 I had written earlier about a Korean drama series, W, which is about a webtoon character come to life. Well, this time round, I'm writing about another K drama that is based on a web novel brought to life by one of my favourite actors Park Bo Gum! You can watch the series here or read the episode synopses here (along with some interesting comments).

The Lion and the Lamb
What I love about Park Bo Gum's acting is that he is so versatile and convincing. One moment, he is the majestic Crown Prince Lee Yeong, standing before the court officials with his commanding stature, wielding power over the life and death of his subjects.

And the next moment, he's the gentle and patient half-brother of the little mute princess, teaching her to read and write, or the loving caregiver of the sickly consort who had looked after him following his mother's death.

This aspect of the character Lee Yeong reminded me so much of our own Prince of Peace who is both the powerful and fearsome Lion of Judah, as well as the meek and gentle Lamb on the throne.

Friends
Lee Yeong gets to know Hong Sam Nom while out and about town incognito. Hong ends up being sold off to the palace as a eunuch to repay his debts. Lee tells his only friend and bodyguard, Kim Byung Yeon that he prefers not to reveal his true identity as Crown Prince to Hong as he wants to keep Hong as his friend. He eventually has to tell Hong but instructs Hong - who is shivering in fear as he thinks he deserves death for having been rude to the Crown Prince all this time - to speak with him informally whenever they are alone.

Just like Abraham was called God's friend (James 2:23), we have the confidence to approach Him freely because of the blood of Christ (Hebrews 10:19). I also think of Esther when she approached the king unsummoned, thinking that she might very well be put to death. Instead, the king shows her favour and extends his sceptre towards her (Esther 5:1-3). In the same way, God has shown us grace and mercy, and extended His cross-shaped sceptre towards us.

True worth
Anyway, it turns out that Hong is actually a girl (Hong Ra On) masquerading as a boy (Hong Sam Nom). She has no idea why, but her mother told her when she was eight that she has to remain a boy till it is safe again. Unfortunately, she is separated from her mother and since she is clueless about when it would be safe again, she has to keep pretending to be a boy. However, Lee soon sees through her disguise and at about the same time has also fallen in love with her. Even though to everyone else she is just a simple and lowly eunuch, Lee confesses that she is the 'most precious lady in the world' to him. She has a hard time believing him as she is suffering from extremely low self-esteem due to the identity confusion she has had to live with for the past 10 years. In fact, she keeps blaming herself for everything that goes wrong even when it has nothing to do with her! Only much later when she has come to terms with her true identity is she able to accept Lee's love and affirmation (as well as stop the self-blame).

In the same way, regardless of how the world sees us, what people say about us or how circumstances may try to determine our identities, it is only when we agree with God on who we are - His sons and daughters, hence princes and princesses - and what we are worth - His treasured possession - that we will end our struggles with self-doubt and self-deprecation.

'You are mine'
A hugely popular catchphrase that audiences have picked up from the drama was how Lee refers to Hong as 'he is my person' or 'you are my person'. Lee keeps saying that to her and to others to reinforce his determination to keep her by his side. There's even a song in the official soundtrack entitled My Person, a haunting chart-topper sung by none other than Park Bo Gum. The song title is also translated as 'my dear' or 'my love' (by different Youtube users who have uploaded the song).

It reminds me of another beautiful song found in the Bible with the words: "My beloved is mine and I am His" (Song of Songs 2:16). Just like the assurance Hong has that she belongs to and is under the protection of the Crown Prince, we can also rest secure in the knowledge that we belong to the King of Kings and nothing can separate us from His everlasting love (Romans 8:31-39, Jeremiah 31:3).

Faith
However, there are times when Hong does struggle and tries to fend for herself. In one of these instances, she ends up being taken into captivity by the Qing envoy before she finally realises she needs Lee's help and should have trusted in him all along. Sometimes, our faith also falters and we run around trying to solve our own problems when all we need to do is turn to Him to find the answers. 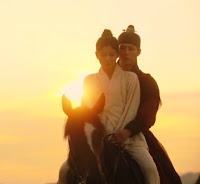 Longing
Earlier on in the plot, when Lee first confesses that he knows she is a woman and that he is in love with her, Hong tries to avoid him. She is confused and needs time to sort out her own feelings. Lee understands and gives her time and space to do so in spite of how much he yearns for her. Another song from the OST, Because I Miss You, expresses his sentiments beautifully. Finally, she is moved by his gesture of love when he learns the sign language that she has taught the mute princess and uses it to express his love for her. He also asks her not to leave him and finishes off with hands clasped and eyes closed as though in prayer, the sign for 'please'.

This scene looks just like the father who longed and prayed for the return of his prodigal son in the parable Jesus told (Luke 15:11-32). Just as the father who willingly gave the inheritance to his son and let him leave, God sometimes allows us to stray away from Him in order to figure things out on our own. But when we finally return to Him, our convictions will be even stronger than before. In the meantime, He waits and yearns for us like the father waited for his son, and Lee longs for Hong.

Working
Lee and Hong are separated again much later in the series when she has to escape and go into hiding after it is discovered that her father was the rebel. This period of separation is much longer than the first, and while Lee pines for her just like before, he doesn't try to meet her. Instead, he asks Byung Yeon to assure her that he is working things out. He manages to clear her name so she can return to him without anymore fear.

There are times in our lives when we feel that God is far away and doesn't seem to care about what we are going through, but He has not left us and will never forsake us. Even when we don't understand why certain things happen the way they do, we just have to trust that He will work all things out for our good (Romans 8:28) in His good and perfect time!

Known
Not only does Lee see Hong as precious and his beloved, he also continues to believe in her despite the accusation that she had helped the assassins who stormed his chambers one night. While the officials are hunting her down for being the rebel's daughter, Lee never doubts her sincerity. That gives Hong the courage to not give up and eventually return to the palace in disguise so as to nurse him back to health after he had been poisoned.

We often face criticism and accusations too, especially as Christ's followers. The world hates us because it hated Him first, but we have been called and chosen by Him (John 15:18-19). Our Lord not only knows us by name even before we were born (Jeremiah 1:5), He also knows our every pain (Psalm 34:18). Therefore, we do not despair but continue to persevere and run this race for Him in the face of persecution and suffering, while looking forward to day when we will return to Him and experience joy forevermore (John 16:22).

There is no doubt that Park Bo Gum is one of the most handsome Korean actors around. And the director banks in on this by focusing the camera and zooming in on his face from different angles, and even on his hands and fingers. Perhaps they are trying to make up for the lack of a pretty and dolled up female lead (after all, she's dressed as a man for most part of the series) by featuring a beautiful male lead instead. 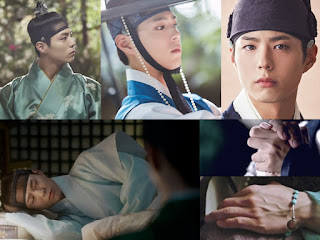 A Park Bo Gum feast for the eyes!

Yet no matter how good-looking PBG is, it still pales in comparison to the beauty of our King! That is why the psalmist desires to dwell in the temple all the days of his life in order to behold the beauty of the Lord (Psalm 27:4). Just like how Hong sits and gazes longingly at Lee while he's studying or sleeping, one day we will get to gaze forever at His most beautiful face.

'How can it be'
Not only is the Crown Prince shown as being beautiful, he is also portrayed as being heroic and self-sacrificial. Lee saves Hong again and again - from drowning, from the Qing envoy, and from the assassins where he gets stabbed instead. Each time, Hong, along with all the other eunuchs and officials, is incredulous for she can't understand how he could be willing to do all that for such a lowly subject.

Our God and King has in fact died and sacrificed Himself on the cross for us, even though we don't deserve such attention. That's why we sing in a very popular worship song: "Amazing love, how can it be, that You my King would die for me?"

To be continued
As you can probably guess by now, I love this drama a lot and have lots to say about it. That's why there will be a second part coming... soon, I hope! ;)
Posted by Anne Soh at 10:00