NDP 2018 - the next generation, hope for the future 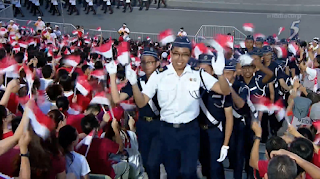 This was my favourite scene from the National Day Parade last night (celebrating the 53rd year of Singapore). My next favourite part would be the parallels drawn between those who literally built our nation in the past (Samsui women) and those who continue building in the present (foreign construction workers). Anyway, back to this photo! It shows the student uniformed groups marching up the spectator stands, waving at and high-fiving members of the audience. The commentary went something like this, "There's the symbolism of having these students embody the commitment, energy and dynamism of young Singaporeans as they chart a path to a greater future for Singapore."

Looking at these fresh, happy faces, I certainly felt the joy and hope for a bright future for them as individuals and for us all as a nation. However, I was moved not only by this. I had mixed feelings due to having heard about four young people aged between 18 and 21 who had taken their own lives, all within the past three weeks. These four were just like the young people featured at the parade, yet their course through life had ended abruptly. I had been grieving the loss of these young lives and the promise that each of them had held. So when I saw this portion of the NDP, the sense of hope for the next generation was once again revived in me!

It begs the question though, of what we must do to help and support these young people in order for them to achieve that bright future. Youth nowadays face much more pressures and stress than we did. Instead of the two exams a year I used to have, many of them now have to take weekly tests too. And while we who were in the performing arts groups had a year's break between each SYF competition, they are now made to enter various regional/international competitions during that in-between year.

Some may say we just need a structural change, a revamp of the education system for instance. Yet, I think that it requires everyone of us to have an attitude change. At the societal level, there is a cause-and-effect mentality where we expect certain results (output) after all the resources that have been invested (input) in our young. But we mustn't forget that these are individuals with unique interests, talents, challenges and struggles.

So regardless of whether you have a young person under your direct care or not, the next time you meet one, don't just ask them about their exams or results. Be genuinely interested in what they are passionate about, and show real concern for the burdens that they carry. We may not be able to change the system on our own, but by sharing our ears, hearts and love with them, we will make all the difference in their lives.