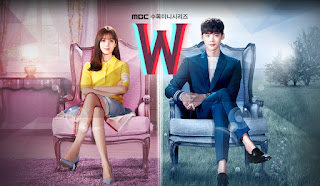 This Korean drama series, W - Two Worlds, really got to me. It broke the mould of the typical K drama formula (which will be the subject of another post) and got many viewers, including myself, drawn into the manhwa world (pun intended!) I also started to see many parallels between the story and the Biblical narrative so I'm going to try and describe some of them here. But if you haven't watched it yet and would rather do that first, it's available here. This site also provides well-written synopses of each episode with accompanying (mostly) thoughtful remarks.

What gave you the right to create me?
So the entire plot is based on how the female protaganist Yeon Joo (Han Hyo Joo) is pulled into the world of a webtoon W created by her Dad.  She meets and gradually falls for the main character Kang Chul (Lee Jong Suk). Later on Kang Chul also finds a way to step into the real world and meets his creator, Yeon Joo's Dad. However, he is boiling with anger as he feels that Dad has been unfair in killing off his entire family without good reason near the start of the webtoon. He demands an explanation and argues that Dad had no right to decide on such a horrendous life for him.

This reminded me of Job's tussle with God after he lost his family, everything he owned and even his health. And just like Job and his friends, many people mistakenly conceive of God as one who either has no control over what He has created and hence can't stop all the evil and suffering in the world, and/or that God flicks us around like pawns according to His whims and fancies without sparing a thought for our feelings. But we know that this is not who God really is. Unlike Dad in the drama who is self-centred and helpless in the face of his creature (he got shot by Kang Chul), our God is not only all-powerful and sovereign over the entire universe He created, He is also loving and merciful. However, He has given us free will (which I'll talk about more later) and because of sin, we keep making poor decisions and that is the reason for all the evil and suffering in the world. But God does not watch on helplessly. On the contrary, He is always at work to redeem our mistakes according to His plans for the world and for each one of us.

Christ figure
Anyway, halfway through the drama, Yeon Joo is reminded that she was in fact the creator of the main character Kang Chul. While a teenager, she had described and drawn him as her imaginary perfect boyfriend (more about this later) and her Dad had taken it up for the webtoon without her knowledge. So just like Jesus was with God from the beginning of creation, she was co-creator with Dad. Not only that, she also enters the created world, as Jesus did. And while there, Yeon Joo exercises her skills as a doctor and keeps saving Kang Chul's life. That is similar to how Jesus healed the sick and raised the dead while He walked the earth.

Yeon Joo's resemblance to Christ extends further to her unconditional love for Kang Chul that bears all, even forgiving him for shooting her Dad. That is reminiscent of how Jesus asked God to forgive those who crucified him while He hung on the cross. In addition, even though they subsequently realise that she is mortal in the webtoon world and the Killer is after her life, she is determined to stay in it for as long as she can because of her love for Kang Chul. Again, that reflects the same self-sacrificial love of Christ who came to our world to die for our sins. Eventually, she dies and is resurrected within the webtoon world, although it's not very clear whether it happens within the same time frame as Jesus'. But her resurrection is brought about by her Dad (through his drawing), as Jesus was raised from the dead through the power of God.

Born again of water
Kang Chul also experiences rebirth in his own way after he jumps into the Han river and everything in his world including his life is suspended. He is pulled out of the river and given a new life by Yeon Joo (through her drawings). This spoke to me of water baptism where symbolically our 'old self' dies when we are immersed in the water and then we are given a 'new life' in Christ when we emerge from the water.

After his 'water baptism', in this new life, Kang Chul has a whole new perspective because he realises that everything he used to seek after in the webtoon world is meaningless (fame, fortune, revenge) now that he has discovered his true destiny (ie to love Yeon Joo, his creator). Isn't this what those of us who love and pursue God experience too? All that the world can ever offer us pales in comparison to the wonder and beauty of His love, and any other pursuit is a mere chasing after the wind (or bubbles!)

Created for love
I mentioned earlier how there is a flashback to Yeon Joo's teenage years when she had created Kang Chul as her dream lover. He is destined to love her, for that is the purpose of his existence. Hence we see how after his rebirth the only thing that he finds fulfilment in, and it becomes his main pursuit, is to love and please her. In fact, even before that, Kang Chul is mysteriously attracted to Yeon Joo from the first time he sets eyes on her. Even after his memory has been erased, he is unexplainably intrigued by her. In the end, even though he has to stay in prison for three years, he finds joy and strength in the hope that when it is over he will be able to spend the rest of his life with Yeon Joo in the real world.

We were also created out of God's love and His desire for a relationship of love with us. Our love for Him propels us to seek His pleasure in all that we do. And until we realise this, many of us try to fill that longing for intimacy with Him by seeking after other 'loves'. But ultimately, we will not experience true fulfilment until we find and acknowledge our one true love. And this is the only love that can sustain and strengthen us through whatever trials and tribulations, even persecution, we may face in this life for we know that one day we will meet our Beloved face to face and spend eternity with Him.

Free will vs predestination
It is also because of love that God has given us a free will. A forced love is not real love, but only one that is freely given in reciprocation can be considered love. And that leads to the age-long debate over free will and predestination. The interplay between how Kang Chul is predestined to love Yeon Joo and how he is also given the self will to choose whether to pursue the love of his life (eg he decides to complete the 10 loving acts even though he has lost his memory of their relationship) perhaps gives us a glimpse of how free will and predestination actually work together hand in hand.

Another character also illustrates the dynamics between free will and predestination - Han Chul Ho. Yeon Joo comments at one point that he will no doubt try to eliminate the Killer because that's how his character has been set up yet Han is also shown to have self will in making that very decision.

Impostor god
The Killer is a nameless and faceless character whose sole purpose is to kill Kang Chul's family. Nevertheless, he becomes dissatisfied. He longs to be the centre of attraction and wants to take over as the main character of the webtoon. Consequently, the Killer steals Dad's face and tries to play God by controlling Dad to draw stuff for him in the webtoon in order to change the plot. He even pretends to be Dad in order to trick Yeon Joo and kidnap her.

This is not unlike Satan who became jealous of God and was thrown out of heaven as a result. He then tried to usurp God's place as the centre of worship as seen in how he tempted Jesus by offering Him all the kingdoms of the world if only Jesus would worship him. In fact, Satan still tries to get us to worship him instead of God by tempting us with worldly things like material wealth, power, fame, lust...the list goes on... But just like how Yeon Joo subsequently recognises that the Killer isn't Dad even though he has the same face, we also need to be alert and not fall prey to the lies of the wolf in sheep's clothing, the impostor god.

Even though the Killer does manage to kidnap Yeon Joo and  eventually shoots her fatally, he does not gain the final victory for he is killed and Yeon Joo is resurrected. This is analogous to how Satan thought he had triumphed over God when His Son was crucified and died, but with Jesus' resurrection he was defeated once and for all and Jesus won the final victory!

[I shall end here with this point. Despite having started writing this entry more than a week ago, it must be divine timing that I've completed it only now when we've just been celebrating Jesus' resurrection over the Easter weekend.]