Find strength in the Lord for the victory is near!

I tried out the Bibliolog interactive Bible study method (which we learnt from Birte Papenhausen recently) during a parents’ prayer meeting today, with the passage taken from 1 Sam 30:1-19. You can read my prepared script here. The parents found it very refreshing as the method helped us to immerse ourselves in the story and experience it first-hand as though we were one (or a few) of the characters. It also opened our hearts to allow the Holy Spirit to speak into our own lives and situations. After the session, many of the parents were asking how they could also use the Bibliolog method in their Sunday school classes, small groups and family devotions! 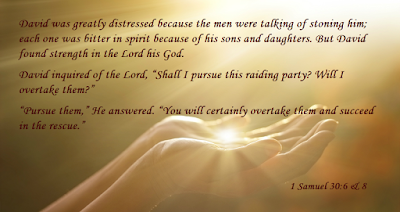 Even while I was preparing the script, I had received great encouragement from the example of David. He sought the Lord in a time of great distress and found strength in the Lord (v.6). Not only that, when he enquired of the Lord, he was told that he would succeed in rescuing their wives and children who had been taken captive (v.7-8). From these verses, I was reminded to look to God no matter how bad things may be and to trust that in Him, we will have victory over all obstacles and circumstances. This is especially relevant for parents who, like David, may feel that they have lost their children to various bondages like addictions, sexual sin, depression or loss of faith. Regardless of how far away they may seem, we can be assured that God is watching over them, He is in control and He will bring them home one day!

During the Bible study this morning, from the responses the parents gave as well as my own thoughts as we went along, I also realised that sometimes we are like the captive wives and children. We may have yielded to sin and find ourselves separated from our family, church and God. But God will not let us go and He continues to pursue us with His love, just as David and his men did not give up the rescue mission even when some among them were too exhausted to go on (v.10).

At times, we may be like those '200 men' who had to stay back. We may feel helpless and unable to do anything to help our children when they are in trouble or even suffering. Instead, we have to rely on others to reach out to our children to lead them out of pain or darkness. For instance, children who shut us out and refuse to talk or listen may need counsellors or youth group leaders to speak with them, or children who are seriously ill would need doctors to heal them. In such cases, all we can do is wait and pray – not only for the results but also for those ‘400 men’ who are battling to save our children.

Finally, while putting ourselves in the shoes of one of the men who had gone out with David and returned victorious, I saw that there are occasions when we may misunderstand the intentions of others. Imagine if the men thought that David was wasting their time or had given up on the rescue mission when he went away to pray, and they had gone off on their own without him or even stoned him to death! Either way, I doubt they would have been successful in retrieving their wives, children and all the plunder. We also need to be patient and give others the benefit of the doubt rather than jump to conclusions and worse still, act or speak rashly against them. In fact, we should stay humble and be willing to learn from others, especially from men and women of faith how to relate with and trust in God.