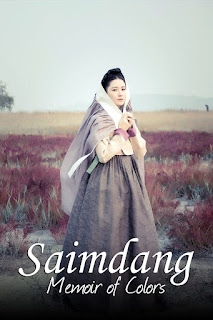 I know I promised there would be a second part to Love in the Moonlight in my previous post, but I just had to interrupt the series with another saeguk (period drama). That’s because soon after I had finished watching Saimdang: Memoir of Colours just last week, an online storm broke out over two issues which I realised were addressed in Saimdang. [Before I forget, you can watch the series legally (ha!) on Netflix.]

Although the series hadn't done so well in terms of its domestic ratings, I personally loved it for the breathtaking beauty portrayed through the magnificent scenery, the exquisite paintings, and even the painters' creative process. I also liked that there were strong female characters - Saimdang herself (Lee Young Ae, from the well-loved Dae Jang Geum aka Jewel in the Palace), and her childhood-friend-turned-nemesis Hwieumdang (Oh Yoon Ah) - and the redemptive element in their relationship. Towards the end, Hwieumdang repented of her scheming ways and saved Saimdang from her villainous husband's plot to kill Saimdang, Saimdang not only forgave her but healing and restoration came when Saimdang cared for Hwieumdang's children when she was in exile.

In fact, the entire series is an extended lobby for gender equality, with both Saimdang and her daughter Mae-chang fighting for recognition of their artistic talents in the royal court. With a bit of research, I found that the historical figure Sin Saimdang, on whom the drama is loosely based, was a bit of a non-conformist herself. She pursued her artistic and literary passions even though it was practically prohibited of women born in nobility. Not only is she one of the very few female painters recorded in Korean history, she is also revered as a model for all mothers. Both she and one of her sons, Confucian scholar Yi I, are commemorated on the ₩50,000 and ₩5,000 notes respectively.

Now, let’s talk about one of the recent uproars on local media. The Ministry of Education is revamping the examination structure in schools by reducing the number of exams students will take in their school career so they can be encouraged to develop a love for learning. There has been applause as well as opposition to the move. No matter what top-down changes are made, ultimately it’s the attitude on the ground, of parents and even students themselves, that must shift before real change can occur.

In the drama, Saimdang withdrew her son Hyeon-ryong (based on the real life Yi I) from the most prestigious school in the city even though he had passed a very difficult admission test. She had discovered that the parents and the students were fixated on results and student ranking, so much so that Hyeon-ryong was beaten up by Hwieumdang and her son after Hyeon-ryong ousted the boy from first place. The headmaster had tried to introduce creative teaching strategies to get the students to develop a sense of curiosity and learn through self-discovery. However, the parents went up in arms and demanded that he revert to the traditional rote learning methods. Furthermore, Saimdang overheard Hyeon-ryong cornering the teacher in class with his trick questions. Once they got home, she reprimanded him for showing off his intelligence by trying to outsmart the teacher. She emphasised the need for good character above talent and intelligence, and concluded that she would teach him herself at home.

Meanwhile, Saimdang’s eldest son Seon confided hesitantly in her that he would like to become a blacksmith instead of continuing with his studies, but was worried that she would feel ashamed of him. To his surprise, Saimdang encouraged him to find his own path and not feel burdened to follow what society expected of him. She elaborated on how the many different occupations are equally important and all help to contribute to the community in their own ways. Subsequently, Saimdang set up a school in their village which welcomed children of all social classes and abilities and every child was encouraged to develop their unique talents. The children had so much fun learning and exploring together that some of the students from the top school even ‘dropped out’ with their parents’ blessings so as to join her school.

The other contentious topic has been about the class divide in Singapore. Accusations are rife online of how there is a lack of social mixing in the community while elitism is being promoted in schools, and the welfare of the lower classes is being ignored by the government. Again, regardless of whatever policies and welfare programmes there may or may not be, we need to have people who will be counter-culture and make attempts to cross the divide and blur the lines separating the different classes for social stratification to be torn down.

Whereas the servants in other households were treated as nameless and faceless almost sub-human creatures, Saimdang regarded her servant girl Hyang-i as one of her own children. Hyang-i would be included in family discussions with her opinions taken into consideration, she sat together with the family during meals, and everyone chipped in with the housework rather than order her around for every little task. (Hyang-i is at the far left and far right of the pictures below.)

After a boy tried to rob Saimdang, she followed him home as he said he needed money to buy medicine for a sickly grandfather. This led to her discovery of a group of starving gypsies living in caves near her paper mill. She immediately cooked some food and fed them, then invited them to work in her mill with the promise that she would split the earnings equally with them. Despite her noble background, she lived and worked among them, and was the first to start every morning and last to pack up at night. She was always polite and respectful, even though the gypsy boy had tried to rob her and some of the other gypsies had initially been suspicious of her and spoken rudely to her.

Saimdang also influenced others to look beyond class distinctions. For instance, she involved her children in the work at the paper mill and in the process, they learnt not to judge anyone based on their class or background. Another noblewoman joined her at the mill to cook and serve food to the workers. The policy at the mill was that whoever had done some work would be given free meals. When the crown prince visited the mill incognito together with another nobleman, they even offered to wash the dishes in order to be able to eat with the workers!

So let’s take a leaf from Saimdang’s book. Rather than point fingers at the government or at society about the ills of the education system or the widening class divide, remember that change really starts with individuals - you and me - who dare to live and act according to our beliefs, whether it’s to focus on character-building, promote a love for learning or bridge the social gap. And sooner or later, there will be a ripple effect as more and more people are affected, and that’s when culture shifts.