"Memories of the Alhambra" - augmented reality and the spiritual realm [SPOILER ALERT!]

With all the hype over Crash Landing on You and its lead actor Hyun Bin, I thought I'd better get down to writing this long-overdue entry on Hyun Bin's previous drama - Memories of the Alhambra. 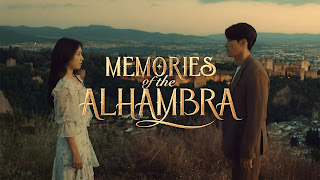 It co-stars one of my favourite female actresses Park Shin Hye and the title is taken from the hauntingly beautiful guitar piece Recuerdos de la Alhambra by Francisco Tárrega which is featured prominently throughout the drama. These were reasons enough for me to continue watching the series even though the blood & gore level was a notch too high for my comfort. Perhaps the highly realistic fighting scenes and special effects could've been part of the reason for its popularity. Anyway, I'm glad I stuck with it till the end as it led me to formulate the following thoughts.

The story revolves around a computer game which utlises augmented reality (AR). A player logs into the game by putting on customised smart contact lenses in order to see the AR non-player characters (NPCs), weapons and special items. They simply remove the lenses to exit the game. To someone outside the game who can't see the AR, players fighting against NPCs look like they are waving around madly in the air. But to the player, the AR as depicted in the drama is so real that they feel like the NPCs and weapons are physically there, so much so that they even experience actual pain when they are injured in the game. However, once they logout, all their in-game injuries would vanish. 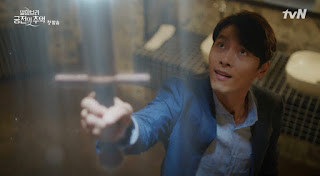 In our real life, there are also two worlds or realms that exist - the physical and the spiritual. As in the drama, not everyone is able to see the spiritual realm unless God has opened our spiritual eyes (like putting on the smart lenses to see the game world). That was why Elisha had to pray, "Open his eyes, Lord, so that he may see," before his servant could see "the hills full of horses and chariots of fire all around Elisha." (2 Kings 6:17)

Just like the battles between the players and NPCs in the game, there is also an ongoing battle in the spiritual realm which impacts the physical realm and vice versa. We get a glimpse of this spiritual warfare between the heavenly armies and the demonic forces through the description by an angel in Daniel 10. However, unlike the virtual weapons used in the game, our weapons are prayer (and sometimes fasting). With the authority that God has given to us through Christ, we are also able to drive out evil spirits as Jesus has demonstrated (cf. Matthew 17:20-21, John 14:12-14).

After the story has been set up, the plot quickens with the discovery that there is a bug in the game. The glitch first started when two players were involved in a violent act while they were within the range of the special NPC Emma. In the game, Emma plays the guitar while keeping peace. Any virtual weapon brought within her range will disappear. But when a player used a real knife to stab another player while they were in the game, it causes an error in the programme as Emma cannot tolerate any violence. The bug upsets the world of the game, leading to the physical death of any player who is killed in the game, and these dead players turning into NPCs that keep coming back to battle live players. 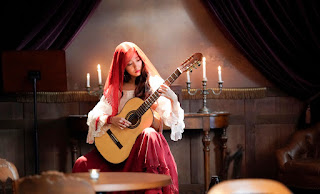 In a similar fashion, sin came into the world when man went against the 'algorithm' set by God (i.e. not to eat from the tree of the knowledge of good and evil). And since God is perfect and holy, He cannot tolerate any sin. Hence sinful man was separated from God. The presence of sin in the world also led to the fall of creation, where things no longer operate according to God's design just like how the bug caused things to go awry in the game.

That's where Yoo Jin Woo (Hyun Bin) comes to save the day (or the game, in this case). For some unknown reason, he is the only player who doesn't need the smart lenses anymore. He gets logged into the game whenever he is in the game zones (initially restricted to Granada in Spain but later expanded to include areas in Korea). So at any time, he could be in the real world as well as in the game world simultaneously. This reminds me of how Jesus was fully human and fully God when He was born into this world.

Although Jin Woo didn't create the bug, he finds out that he is carrying the bug and is the only one who can get rid of it. He has to hand a special item, the 'Key to Heaven', over to Emma in order for her to kill him and destroy the bug in him. The game developer had based this on an actual legend about the carvings on the Gate of Justice at Alhambra that when the 'Key of Heaven' is united with the 'Hand of Fatima' (represented in the game by Emma's hands), the world would end. So once the bug is removed, the entire game world would reset and restart bug-free.

In comparison, Jesus also wasn't responsible for sin coming into our world yet He was the only one who could free us from sin and open the door to heaven for us. He differs from Jin Woo though, in that Jesus was completely free from sin whereas Jin Woo was carrying the guilt of having killed his former-friend-turned-nemesis in the game and causing his actual death. 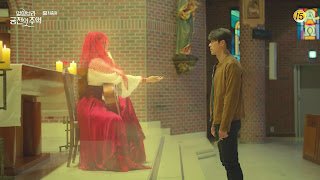 Nevertheless, Jin Woo willingly sacrifices himself in order to save the game just as Jesus redeemed us through His sacrifice on the cross. This analogy is hinted at none-too-subtly as Jin Woo enters a Catholic church building (even though the whole premise was based on an Islamic legend) and faces Jesus on the cross (above the altar) while awaiting the final meeting with Emma that would seal his fate. 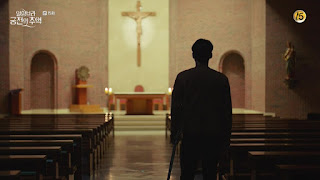 Interestingly, Memories of the Alhambra is written by Song Jae Jung. She also wrote W - Two Worlds which featured a Christ figure too (as written about in a much earlier post). And just like how Christ's resurrection was reflected in W - Two Worlds, there are clues in the finale that Jin Woo is also resurrected in the game world and lives on to help new players destroy their enemies. Nevertheless, he is only visible (and only as a shadow) to some players especially those who believe that he's still alive. In the same way, Jesus is alive and He has sent the Holy Spirit to be our Helper (John 14:26). He can't be seen with physical eyes but those who believe in Him will be able to experience His very real presence.

So, in conclusion, we know that we are engaged in a very real spiritual battle despite not being able to see it with our physical eyes. Yet we also have full confidence that God is fighting for us and that by virtue of His saving work on the cross and His resurrection power, we have the victory!


For the Lord your God is the one who goes with you to fight for you against your enemies to give you victory. (Deuteronomy 20:4)