"Conspiracy in the Court" (2/2) - Foothold vs Stronghold [SPOILER ALERT]

Continuing from my previous entry about this drama...

When the chief of the local police (Park Chul-Min) first receives a bribe from the merchant Yang Man-Oh (Lee Chun-Hee), he has given Man-Oh a foothold by allowing him to smuggle in a ship load of illegal goods. However, as he continues to accept more bribes from Man-Oh, he relinquishes more and more ground to the merchant who can then keep smuggling in and selling off even more illegal goods. 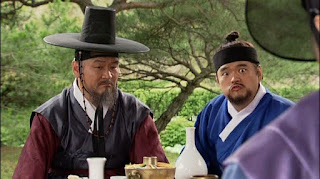 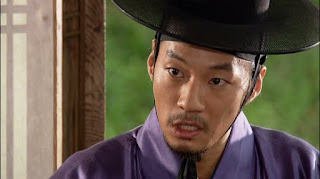 At the same time, Man-Oh is sending bribes to other officials including some high-ranking ministers. Gradually, he builds up a stronghold where he has control over all those corrupted officials who have accepted his bribes. So much so that they give him permission to conduct all kinds of illegal activities under their noses. 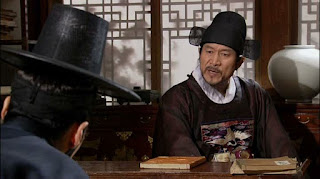 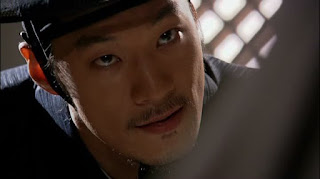 Similarly, if we sin and give Satan an opening to cause a one-time disturbance then it is a foothold. However, if we continue to sin and allow him to gain increasingly more control over our life, then it becomes a stronghold.

If the police chief had come clean after receiving the first bribe and stopped accepting further bribes, Man-Oh would not have been able to gain control over him. By the time the merchant has extended his control over the many corrupted officials, they already find it extremely difficult to stop him and his illegal activities. 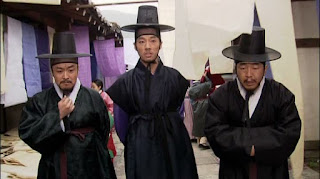 In the same way, we need to confess and repent of our sin that gives the devil a foothold and kick him out. Otherwise, if we neglect to do that and the enemy builds a stronghold in us (eg addictions or negative thought patterns), it would take much more effort to remove his control over us.

Read more about "Conspiracy in the Court" - Power vs Authority

"Conspiracy in the Court" (1/2) - Power vs Authority [SPOILER ALERT]

This drama is only eight episodes long but it was so difficult to understand initially due to the fast pace, convoluted storyline and countless mysteries and secrets that were only unravelled much later. So reading the recaps after viewing each episode really helped me to follow the plot. 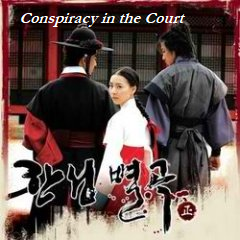 While I was watching this series, I also happened to learn about the difference between power and authority in a course that I'm attending. And I realised that some of the characters actually illustrated these two concepts really well!

Police officer Park Sang-Gyu (Jin Yi-Han) serves in a small town and his team consists of a handful of scaredy-cats with no martial arts skills whatever to boast of. As the team leader, he's not much better off. In fact, when they confront a group of smugglers at the dock, he backs up and hides behind his team while ordering them to charge ahead, which of course they don't. 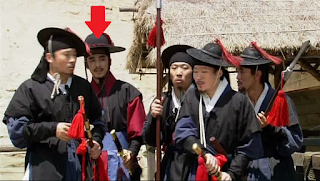 As a result of their incompetence, they are entirely knocked out by just one smuggler! So although Sang-Gyu has the authority to enforce the law by virtue of his position as a police officer, he doesn't have the power to exercise his authority due to the lack of ability. 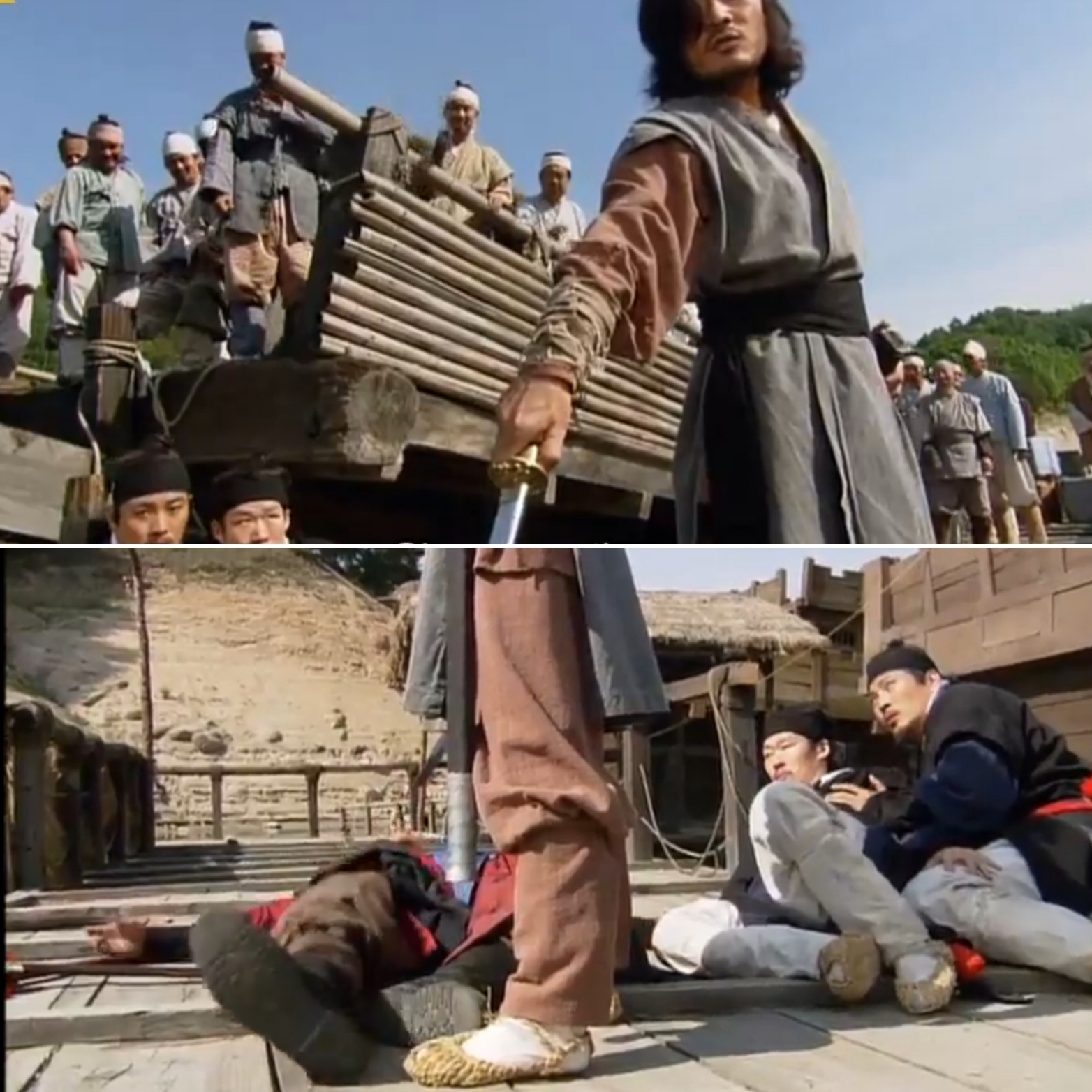 As he is lying on the ground contemplating his next move (of how to surrender!) a master swordsman flies off a nearby rooftop and single-handedly overpowers the smugglers! It turns out that he is Seo Joo-Pil (Han Jung-Soo), Sang-Gyu's good friend and fellow officer from the police HQ in the capital city. 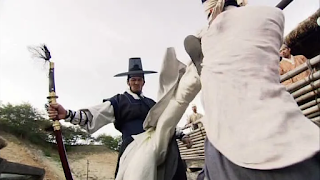 After this incident, we see Joo-Pil hanging around Sang-Gyu a lot more than before and he helps provide the fighting power for Sang-Gyu whenever he has difficulty reining in the criminals. Unfortunately, midway through the drama, Joo-Pil is killed in an ambush.
Sang-Gyu is promoted - the King himself bestows him with the Royal Sword which increases his authority greatly. However, he isn't deployed more capable men in his team. So even when he wields the Royal Sword before some villains to signal his authority, they scoff at him and easily overpower him and his ragtag team as he can't rely on Joo-Pil's support anymore. 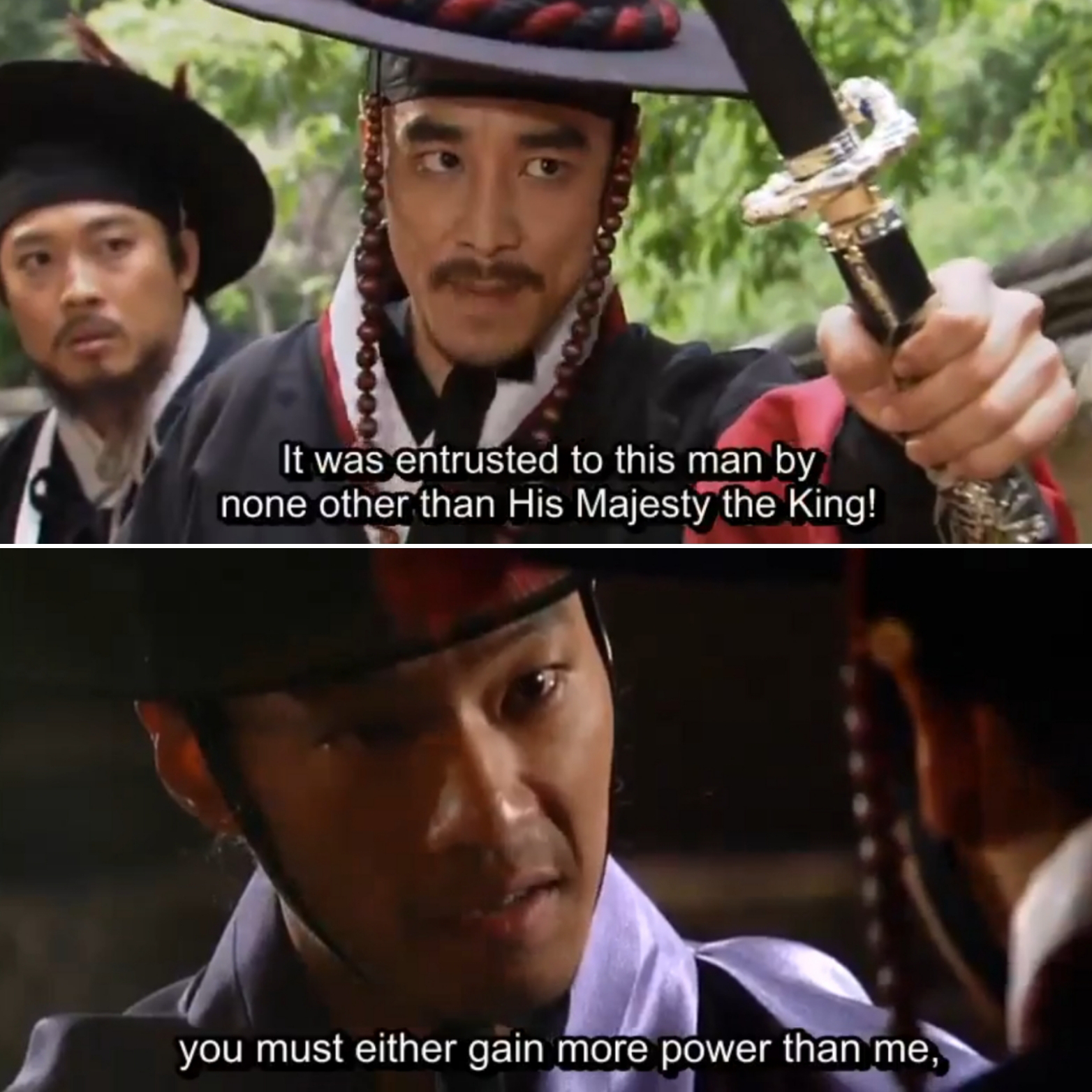 On the other hand, Sang-Gyu's nemesis, the merchant Yang Man-Oh (Lee Chun-Hee) has gathered a great deal of wealth which grants him power over many of the officials including Sang-Gyu's police chief (Park Chul-Min). Although he doesn't have any authority, he bribes these officials who then allow him to conduct his illegal activities without any liability (see my other post about the impact of this corruption). That's why he can openly taunt Sang-Gyu and challenge him to a power contest. 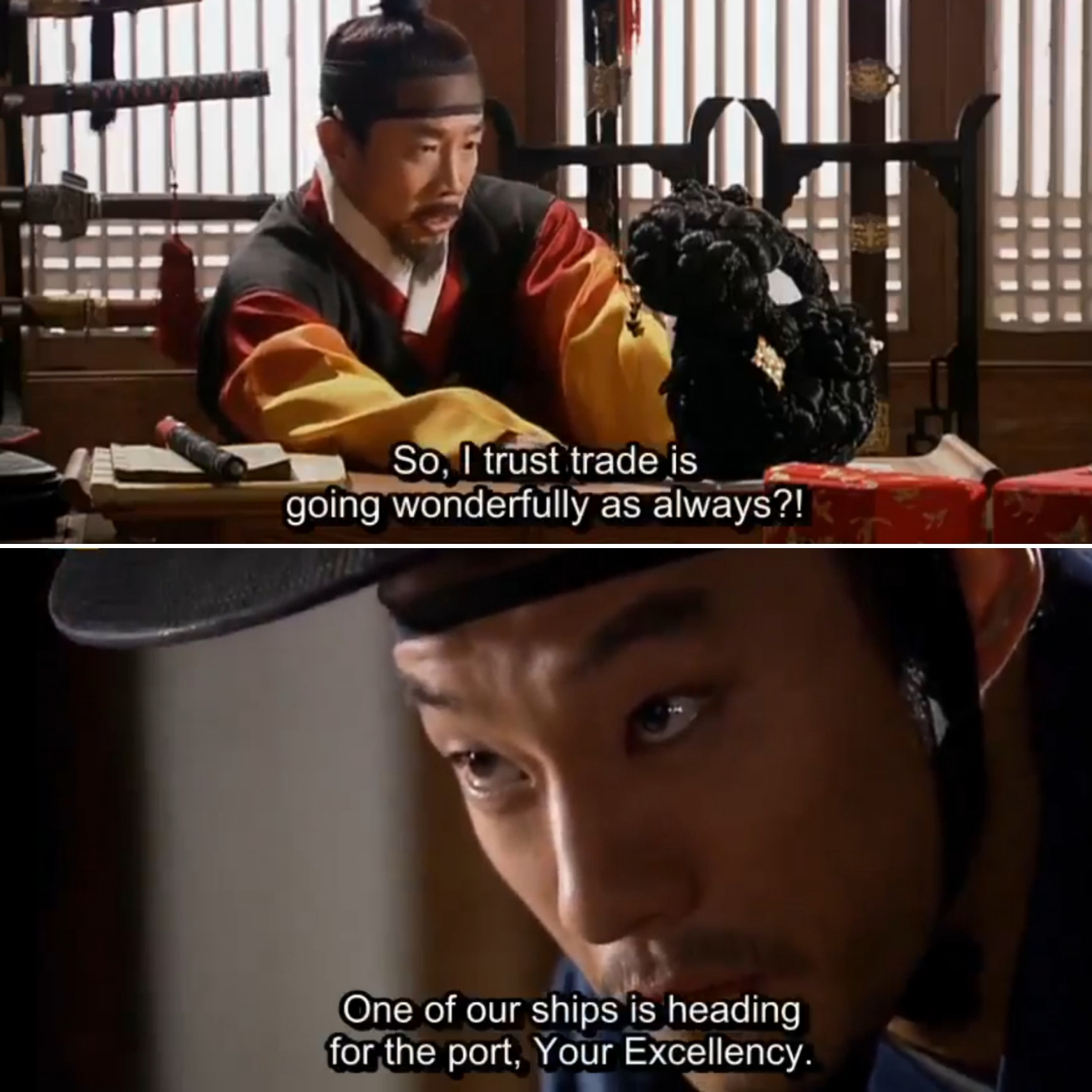 Because of his trespass, the chief has given over his authority to Man-Oh by default. He no longer has any say and instead is at Man-Oh's beck and call. As Sang-Gyu knows about the bribery, he doesn't respect his chief's authority anymore and defies his order of letting Man-Oh and his minions go about their shady business scot-free.

We are very much like Sang-Gyu in the sense that we have been given all authority by the King of kings over demons and to heal diseases (Luke 9:1), as well as to defeat the enemy (Luke 10:19). However, on our own we lack the power to exercise this authority. We need a helper like Joo-Pil. And God has sent the best Helper in the form of the Holy Spirit so that by the power of the Holy Spirit, we can perform signs and wonders, and bring people to Christ (Romans 15:19). Not by our own power or might, but by the Holy Spirit alone (Zechariah 4:6)!
We must be careful though, that we do not hand over our God-given authority to the devil. If, like the police chief, we sin against God, then we lose our right to this authority and the enemy will gain control. Rather than allow Satan to have an opportunity to accuse us and usurp our authority in Christ, we need to keep ourselves pure and unstained by constantly cleansing ourselves of all sin through confession and repentance before God (1 John 1:9).
Read more about "Conspiracy in the Court" - Foothold vs Stronghold
Posted by Anne Soh at 10:11 No comments: