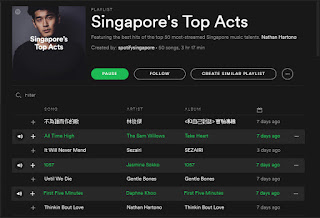 Warning: This is an authentic, sincere Auntie post! You've been warned... he he! Btw, in case you haven't noticed, the above image has obviously been photoshopped cos you can't possibly play more than one track simultaneously on Spotify!!

I must admit I'm pretty backward cos I only got onto Spotify a couple of months ago. Hard to believe but true! Haha!! Being a noob, I'm still exploring the different things it can do, like recommending the top acts in Singapore for me to listen to. Well, with Nathan Hartono's recent conquest (almost) of Sing! China, it's not surprising to find his photo representing this playlist. But as I scrolled down the list, I discovered that I actually recognised a few of the artists' names and that they had been through the doors of Destiny Music!! In fact, other than these names spotted on Spotify, there are also many other Destiny alumni who have become Youtube stars, taken part in national and international competitions and won or done very well, performed at all kinds of events all over the world, produced recordings and staged their own concerts and more!

For those of you who don't know, my husband and I co-founded and ran a music ministry for youth where we trained them and provided opportunities for them to perform and share their faith through music. Our aim was to raise up a generation of young people that would glorify God through their God-given talents in music and the arts. We weren't out to train worship leaders, mind you. Instead we wanted to see the light of Christ shine in the commercial music industry.

When the time came for us to wind up the ministry, there was quite a bit of reluctance on our part as well as among the young men and women who had grown up with us. (Some of them had joined us when they were just 12 or 13 years old.) At the time, we felt that we had already achieved what we set out to do - together with these more than a hundred young volunteers, we had reached out to tens of thousands of people with their songs and dances, through live performances and online videos. Not only that, many of these young musicians had also caught the vision of using their God-given talents for the glory of God.

However, as I look at what many of them are doing now, I realise that what we had achieved was much more than that, we had actually planted a seed in these youth that has continued to grow and bloom and bear fruit over the years.What a privilege it is to have partnered with God in the work that He's doing in these young people's lives! And I continue to pray and hope that they will keep that passion for God burning in them no matter how high or how far they go.


I planted the seed, Apollos watered it, but God has been making it grow.
1 Cor 3:6