Love in the Moonlight (or Moonlight Drawn by Clouds) [Spoiler Alert!!!] - part 2

In my previous post on this series, I focused mostly on the relationship between Crown Prince Lee Yeong and his love interest Hong Sam Nom/Hong Ra On. In this post, we will look at two other key characters and a few overarching themes.


Devotion
All the servants in the palace leave their families to serve the royal family. From the very first day, they are told that their aim is to protect the royal family with their own lives. In return, all their needs are provided for - food, clothes, housing, training etc. In the same way, we are called to lay down our fleshly desires and even our lives to serve our King. When we do, He will provide for all our needs as well as take care of our families.


"Truly I tell you, no one who has left home or brothers or sisters or mother or father or children or fields for me and the gospel will fail to receive a hundred times as much in this present age: homes, brothers, sisters, mothers, children and fields - along with persecutions - and in the age to come eternal life." Mark 10:29-30

To the death
The Crown Prince's bodyguard Kim Byung Yeon is also his best friend. Although he is secretly conspiring with the rebels, he's actually motivated by the Crown Prince's ideal of a world where everyone would be seen as equal regardless of class and rank. Ultimately when it comes to a point where he has to choose between the rebel movement and the Crown Prince, he proves his loyalty to the Prince by being willing to die in his place. Because of his sacrifice, the Crown Prince and the rebels are reconciled and they work together to build an ideal kingdom after his acsension to the throne. Byung Yeon is also saved from the brink of death by the Prince and lives on to witness the genesis of the new world. 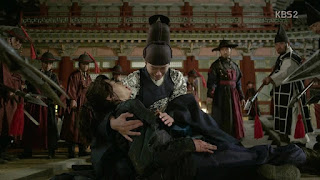 We as soldiers in the army of God should similarly not be put off by suffering and even death as we fight to build His kingdom on earth. No matter how much pain we may have to bear or that we may have to die for the gospel, He will raise us up to live with Him in the new heaven and new earth one day (Revelation 21). I am reminded too of how the blood of martyrs have watered the ground and readied it for the gospel seed to grow and bear fruit, bringing reconciliation between man and God.


"For whoever wants to save their life will lose it, but whoever loses their life for me will find it." Matthew 16:25

The other Kim
Contrastingly, Kim Yoon Sung, the Crown Prince's childhood friend had broken off their friendship and lost his way due to the power-grabbing schemes of his grandfather, Prime Minister Kim. In addition, he and the Crown Prince also become rivals in love. As a result, he keeps wavering in his loyalties, and sadly he doesn't live to see the coronation of the new king. 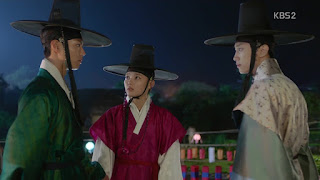 God has given us this grace period to make up our minds as to whether to receive His gift of salvation and to live our lives for Him. However, it would be too late when the time is up - either when we die or when He returns. So let's not waver nor be double-minded like Yoon Sung. Make the decision today to commit ourselves to Him!


For the grace of God has appeared that offers salvation to all people. Titus 2:11

Already but not yet
In order to lighten his sickly father's burden, the Crown Prince agrees to act as Prince Regent and be given full power and control. Unfortunately, many power-hungry ministers are not happy and try to dethrone him. They resort to poisoning him and think he's a goner for sure, but he is actually hiding his recovery from everyone. When he rises again from his bed, he does not take down all the corrupt ministers at once. Instead, he prepares for his eventual victory over them quietly by gathering evidence against them. Then in the midst of their gloating, they are vanquished one after another.

Just as how the Prince Regent is given complete power, Jesus was born the King of Kings and Lord of Lords. He is sovereign over all. Yet sin and evil are still operating in the world, just like those greedy ministers plotting against the Prince Regent. Then when Jesus died on the cross and was buried, those who persecuted Him thought they were rid of Him once and for all. Little did they know that on the third day, He would rise again! And even though right now it appears as though sin and evil are running rampant, He is still at work and one day He will return to eradicate them entirely from the world.


At that time the Lord will punish the spiritual forces of evil in the heavens above. He will also punish the kings on the earth below. The Lord who rules over all will rule on Mount Zion in Jerusalem. The elders of the city will be there. They will see His great glory. His rule will be so glorious that the sun and moon will be too ashamed to shine. Isaiah 24:21, 23 (NIRV)

Truth shall prevail
The detractors led by Prime Minister Kim use all kinds of tricks and deception to frame and harm the Crown Prince and his followers. But rather than follow suit, Lee uses the truth to expose them and their lies, and to set Hong Ra On free from the false accusations they had piled up against her.

Jesus also knew about the plot against Him, and He hinted during the Last Supper with His disciples that one of them would betray Him. In fact, He knows everything that we have ever said and done, even our every thought! On the Day of Judgment, we will have to face the charges for every sinful word, act and thought. Yet, He offers the Way out for us and reveals Himself as the Truth that gives us Life. So all we need is to accept His Truth and we shall be set free from all our wrongdoings!

Kisaengs and gamblers
Lee Yeong's late mother had taught him not to be too high up that he can't hear the people. So he makes it a point to get close to the commoners by roaming around town incognito. He even hangs out with kisaengs and gamblers, who were the lowest of the low, the outcasts of society. Although the ministers criticise his behaviour in court, he explains that it is only by doing so that he can hear the truth about all that's happening in his kingdom. 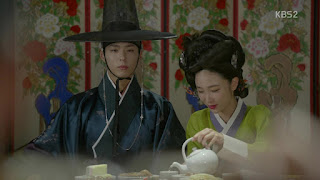 Similarly, Jesus hung out with prostitutes and tax-collectors - those despised by society. He valued each person and saw their need for salvation regardless of their background. It is comforting to know that He will not despise us despite our family background, upbringing, educational level, status, and any other trappings of society. It also means that we have to value others as He values us, and not hesitate to share His love with them regardless of where they are and where they have been.


While Jesus was having dinner at Matthew's house, many tax collectors and sinners came and ate with Him and His disciples. Matthew 9:10

Wheat and chaff
When Lee takes the throne, he gets rid of all those who were against him and promotes those who stayed faithful to him throughout all the tough times to rule with him. When Jesus returns to take His place as Ruler of the world, He will also remove those who deny Him and raise up those who remain faithful till the end to rule with Him.


"Let both grow together until the harvest. At that time I will tell the harvesters: First collect the weeds and tie them in bundles to be burned; then gather the wheat and bring it into my barn." Matthew 13:30
"He who overcomes, and he who keeps my deeds until the end, to him I will give authority over the nations." Revelation 2:26 (NASB)

The New World
After his coronation, Lee sets out to establish a new world where all men are equal. He had been taught by his late mother who was inspired by Catholic teachings, to treat every person as equally worthy of attention.

The new king mingling incongnito with his subjects (left), with the former rebels looking on (right).

In God's kingdom, there is also no distinction and every individual is precious and loved by God. Therefore, we need to build His kingdom through acts of justice - reaching out to the poor, the needy and the oppressed, offering opportunities to the marginalised, and giving a voice to the voiceless.


There is neither Jew nor Gentile, neither slave nor free, nor is there male and female, for you are all one in Christ Jesus. Galatians 3:28
"The Spirit of the Lord is on me, because He has anointed me to proclaim good news to the poor. He has sent me to proclaim freedom for the prisoners and recovery of sight for the blind, to set the oppressed free." Luke 4:18
Posted by Anne Soh at 10:18 No comments: