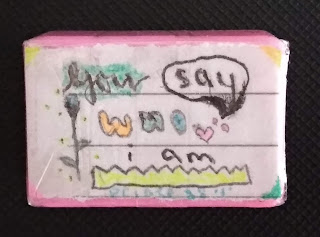 The other day, Aimee gleefully showed me what she had done with this old pencil sharpener of hers. It used to feature a Disney princess (can't remember which) but she had covered it up with this self-illustrated phrase, "You say who I am." I think this probably came about from a chat I had had with her last week. She was rather down because she couldn't cope with homework and all, on top of the heartache she was already suffering from as she had been told she mustn't dance for a month due to a leg injury. She absolutely loves to dance and in fact, dancing is therapeutic for her! So basically, she was feeling pretty helpless and worthless.

I prayed with her and said that God has made her with greater potential than she realises. So she needs to ask Him to reveal to her who He has made her to be, and what other God-given talents and abilities she has yet to discover. Then she must believe what God says, instead of the lies from the devil telling her she's not good enough, and live out the truth that God shows her about herself.

It's rather apt then that it was a Disney princess that got covered over on this sharpener, for most little girls define themselves according to the qualities of these fairy tale princesses. As they get older, of course they start to base their identity on what's prevalent in society, popular culture and media. The 'You' who tells them who they are is what they see on social media, and in movies and videos. As a result, many of them end up with low self-esteem and even become depressed or suicidal when they find that they can't measure up to these standards.

There's a scene in Wreck-it Ralph 2, where Vanellope crashes into the Disney princesses' changing room, and she goes through just such a struggle with her identity. The princesses are trying to figure out what kind of a princess she is and start to list all the qualities she should have. She fails all of them except for the final one - everyone assumes all your problems are solved when a big strong guy comes along. Of course, the princesses are thinking of their Prince Charmings but we all know Vanellope's knight in shining armour is none other than her bestie Ralph, who is anything but charming!

Anyway, reassured that she is a princess after all, the princesses start giving her advice on how the music and singing should come naturally when she realises what it is that she really wants. But she has trouble convincing them and herself that what she wants is a steering wheel (the very thing that made her and Ralph break into the Internet). In fact, after this encounter, she becomes gradually more and more unsure of whether the steering wheel is really what she needs. It is only when she takes the only piece of good advice from the princesses, that is to spend time reflecting, that she finally realises her innermost desire is to be part of the Slaughter Race game.

That's when she goes into a snazzy song a la Disney princess style, albeit accompanied by macabre scenes of car crashes, explosions and straggly dogs popping out of a shark's mouth. Even though the visuals are as far away from the usual Disney princess' backdrops as possible, there is no doubt that this is what Vanellope was made for. However, she is worried about what Ralph would think as his hopes are for her to go back to her old game Sugar Rush. Eventually, Ralph also understands that Vanellope needs to pursue her own dream and lets her go with his blessings.

Even though the Disney princesses initially attempt to stereotype Vanellope, we can also learn from their advice to her. We need to take time to seek God and reflect on who He has made us to be. If we judge ourselves by other people's standards or try to meet other's expectations of us, even if they're from our closest family and friends no matter how well-intentioned, it will only lead to confusion, frustration or depression. Our identity must be founded on the unique blueprint that God our Maker has designed us with. And only when we start to live it out will we find true purpose and fulfilment.

I praise you because I am fearfully and wonderfully made. - Psalm 139:14a